The Next Rembrandt – How This New Painting Was Created 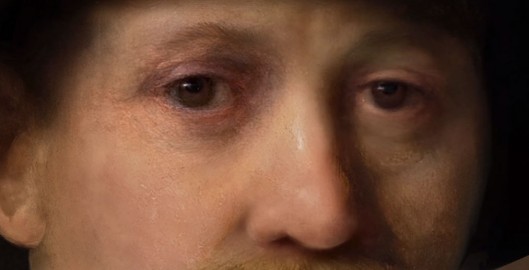 Blurring the boundaries between art and technology, the organization “The Next Rembrandt” set out on a challenge to see if the great Master could be brought back to life to create a new painting. Together, ING, Microsoft and others collaborated on the project to use modern computer and imaging technologies that would re-create Rembrandt van Rijn’s inimitable style and technique. From The Next Rembrandt project:

It’s been almost four centuries since the world lost the talent of one its most influential classical painters, Rembrandt van Rijn. To bring him back, we distilled the artistic DNA from his work and used it to create The Next Rembrandt.

We examined the entire collection of Rembrandt’s work, studying the contents of his paintings pixel by pixel. To get this data, we analyzed a broad range of materials like high resolution 3D scans and digital files, which were upscaled by deep learning algorithms to maximize resolution and quality. This extensive database was then used as the foundation for creating The Next Rembrandt.

We now had a digital file true to Rembrandt’s style in content, shapes, and lighting. But paintings aren’t just 2D — they have a remarkable three-dimensionality that comes from brushstrokes and layers of paint. To recreate this texture, we had to study 3D scans of Rembrandt’s paintings and analyze the intricate layers on top of the canvas.

We looked at a number of Rembrandt paintings, and we scanned their surface texture, their elemental composition, and what kinds of pigments were used. That’s the kind of information you need if you want to generate a painting by Rembrandt virtually.

We created a height map using two different algorithms that found texture patterns of canvas surfaces and layers of paint. That information was transformed into height data, allowing us to mimic the brushstrokes used by Rembrandt.

In creating the new painting, it was imperative to stay accurate to Rembrandt’s unique style. As “The Master of Light and Shadow,” Rembrandt relied on his innovative use of lighting to shape the features in his paintings. By using very concentrated light sources, he essentially created a “spotlight effect” that gave great attention to the lit elements and left the rest of the painting shrouded in shadows. This resulted in some of the features being very sharp and in focus and others becoming soft and almost blurry, an effect that had to be replicated in the new artwork.

We then used an elevated printing technique on a 3D printer that output multiple layers of paint-based UV ink. The final height map determined how much ink was released onto the canvas during each layer of the printing process. In the end, we printed thirteen layers of ink, one on top of the other, to create a painting texture true to Rembrandt’s style.

Read the complete story at The Next Rembrandt.

The Next Rembrant – Watch How It Was Done