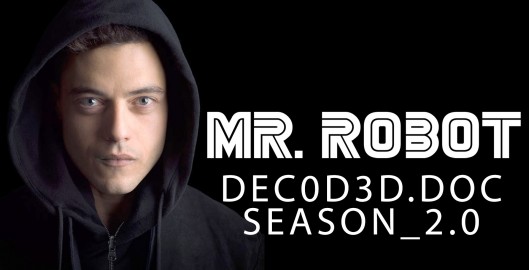 “Mr. Robot” follows a Elliot Alderson, young computer programmer who suffers from social anxiety disorder and forms connections through hacking, who is recruited by a mysterious anarchist, who calls himself Mr. Robot. From the Mr. Robot description:

MR. ROBOT follows Elliot Alderson (Rami Malek), a young cyber-security engineer who becomes involved in the underground hacker group fsociety, after being recruited by their mysterious leader (Christian Slater). Following the events of fsociety’s hack on multi-national company Evil Corp, the second season will explore the consequences of that attack as well as the illusion of control. The series also stars Portia Doubleday, Carly Chaikin, Grace Gummer, Michael Cristofer and Stephanie Corneliussen.

When season 2 of Mr. Robot premieres this summer, it will pick up after fsociety’s cyber-attck on Evil Corp, but will Elliot ever recover the memories he lost in those three days?

According to the first official trailer (and the words of POTUS), the effects of the 5/9 hack will impact the economy in “extraordinarily significant” ways, as the new season of Mr. Robot explores themes of revolution and the illusion of control.