X-Men – Days of Future Past 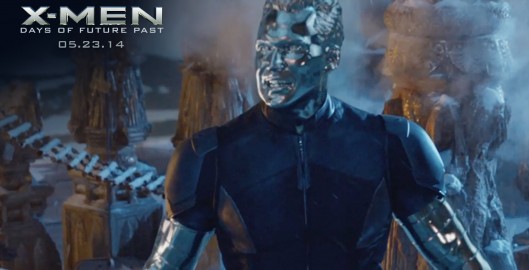 “X-Men – Days of Future Past” is said to be the ultimate X-Men ensemble fighting a war for the survival of the species across two time periods. History in the 1970’s and the present-day collide when the characters from the original “X-Men” film trilogy join forces with their younger selves from “X-Men: First Class,” in an epic battle that must change the past to save our future. Early reviews:

“Most notable is newcomer Evan Peters, who nearly steals the film as the fast-moving Quicksilver, whose extraction of Magneto from high-security captivity in a sub-basement of the Pentagon combines visionary action and slapstick comedy in a brilliant sequence.”
– Lou Lumenick, The New York Post

“A funky, surreal experiment in counter-factuals and variant myths. It channels Watchmen, The Terminator, The Matrix, Life on Mars and Independence Day.”
– Peter Bradshaw, The Guardian

“Back at the helm of the Fox/Marvel franchise he successfully launched 14 years ago, director Bryan Singer stages a stealth reboot by introducing a playful time-travel element to the ongoing saga, bringing two generations of mutantkind together in a story that toggles cleverly (if not always 100% coherently) between the political tumult of 1973 and a not-so-distant dystopian future.”
– Justin Chang, Variety

X-Men – They Must Alter The Past Poster