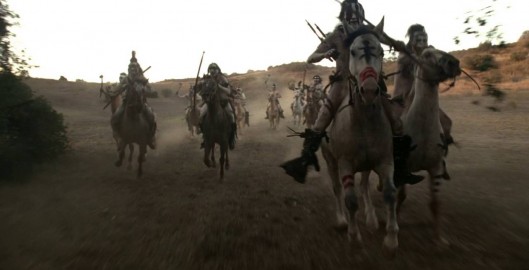 Ed Harris and Anthony Hopkins star in the 2016 “Westworld” series from HBO, inspired by the 1973 film, based on Michael Crichton’s 1973 script. J. J. Abrams and Jonathan Nolan created the Westworld pilot, and the premiere episode is directed by Nolan. In an interview with Christopher Nolan and producer Lisa Joy, Nolan said:

…it’s about a theme park where you can take your id on vacation. But there’s way more to it. It’s based on a film that’s 40 years old, and one of the amazing things about Crichton is he was such a visionary. For much of science fiction, it felt like so many of the questions were a long way away.

I actually think we’re in a moment now where these questions are close in the real world. Our world is about to get very off, and some of the questions Crichton had in his film we’re hoping to elaborate on in the series. As exotic as they seemed years ago, they are now becoming very frighteningly relevant. Read the EW interview.

The series also stars James Marsden, Evan Rachel Wood and Thandie Newton who will reportedly play androids that can be killed and then replaced creating opportunities to play multiple characters in a high-tech amusement park. Miranda Otto, Shannon Woodward and Jeffrey Wright will also star in the series.