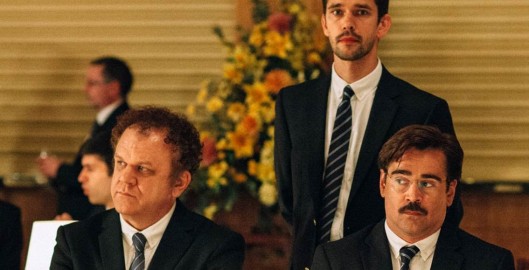 Colin Farrell and Rachel Weisz star in “The Lobster” directed by Yorgos Lanthimos. The film premiered to raves at the 2015 Cannes Film Festival. Farrell stars as a man living in a dystopian future in which all single people are required to find love or risk being turned into wild animals. From the Toronto International Film Festival description:

Colin Farrell, Rachel Weisz and John C. Reilly star in the deliciously bizarre new film from Greek auteur Yorgos Lanthimos (Dogtooth, ALPS), about a curious hotel where the residents are charged with finding a new mate within 45 days — under penalty of being transformed into animals should they fail.

A wickedly funny protest against societal preference for nuclear coupledom that escalates, by its own sly logic, into a love story of profound tenderness and originality. -Guy Lodge, Variety