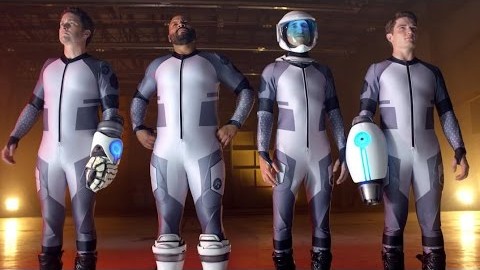 “The Lazer Team” is the upcoming science fiction comedy about four unlikely heroes who get recruited to solve an alien communication received by the SETI Project in the 1970’s and save the world. From the IMDb description by Matt Silver:

After billions of years of thinking we are alone in the universe we decode a message telling us we are not alone, and that the universe is a dangerous place and that we are going to be attacked. Luckily, the coded message came from a friendly alien race that fathered and protected us over the years. And now they are giving us the tools to fight back (in the form power armor).

But the delivery service takes a long time (I’m assuming over 30 mins because they get the suit for free), and during those loooong decades waiting for that cargo ship to arrive with their one power suit, they choose a champion of earth to train to wear the suit and defend the earth! Then the ship finally arrives… Only to get shot down by 4 morons who play with the suit and ultimately get one piece each stuck to them. Now they need to work with the government to train these 4 morons with individual pieces attached to them. Will they save the day or will they stand around contemplating life? Read more.

The film made history on the crowdfunding platform Indiegogo, raising a site-record of $2.48 million in funding. Rooster Teeth Productions, the fourth most-viewed YouTube channel in the world (non-music) in 2013, produced the film.