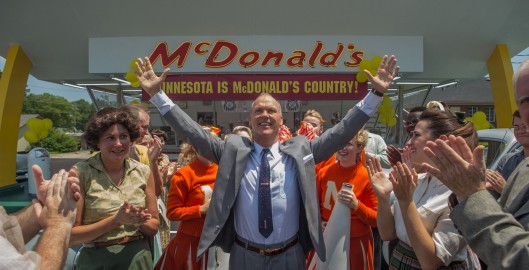 Michael Keaton stars as Ray Kroc in “The Founder”, the life story of Kroc and his discovery of the McDonald brothers and their humble hamburger drive-in operation. From the Weinstein Company description:

Written by Robert Siegel (BIG FAN), THE FOUNDER is a drama that tells the true story of how Ray Kroc (Michael Keaton), a salesman from Illinois, met Mac and Dick McDonald, who were running a burger operation in 1950’s Southern California. Kroc was impressed by the brothers’ speedy system of making the food and saw franchise potential. He maneuvered himself into a position to be able to pull the company from the brothers and create a billion-dollar empire.

At the top of the movie poster, this tantalizing line teases something more than a biopic: “He took someone else’s idea, and America ate it up.”

With Prince Castle Multi-Mixer sales plummeting because of competition from lower-priced Hamilton Beach products, Ray took note of the McDonald brothers who had purchased 5 of his Multi-Mixers. Immediately after visiting the San Bernardino store, Ray became convinced that the setup of this small chain had the potential to explode across the nation. He offered his services to the McDonald brothers, who were looking for a new franchising agent following the departure of agent Bill Tansey due to health issues.

Ray Kroc opened the first restaurant of McDonald’s, Inc. in Des Plaines, Illinois. Kroc remained active in Des Plaines until the end of his life, frequently phoning the manager of the store across the street to remind him to clean his restaurant properly. The Des Plaines location boomed, bringing in hundreds of dollars on its opening day. Ray franchised out scores of restaurants to franchisees. The brothers were satisfied with the money they had, and did not feel a need to expand their empire. Read more.