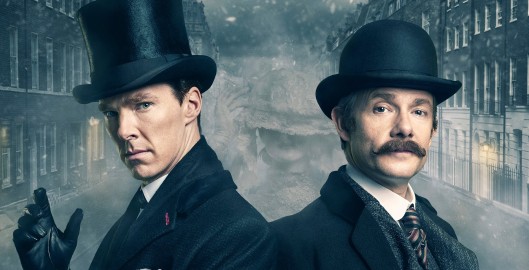 “Sherlock” is the contemporary adaptation of the Conan Doyle stories for a stand-alone holiday special at the end of 2015 and a three-episode series 4 in 2016 on BBC One. Using Doyle’s detective plots, Sherlock Holmes lives in early 19th century London and acts more cocky towards Scotland Yard’s detective inspector Lestrade…even though he seems less confident. Sherlock was renewed for the fourth BBC series. The three-episode series is scheduled to be filmed in early 2016, following the full-length Christmas 2015 special which went into production in January 2015. Read more at Wikipedia.

“Sherlock – Many Happy Returns” is a short mini-episode for fans of the BBC series returning for the next season. BBC released “Many Happy Returns” to provide a sense of what’s been happening to the characters in the two-year gap between the seasons, a time in which Dr. Watson and Detective Greg Lestrade both believe Holmes to be dead. The popular modern day take on Arthur Conan Doyle’s iconic detective season three premiered in the U.S. on PBS on January 19th at 10pm.

“Sherlock: The Abominable Bride” will premiere on January 1st, 2016 in both the U.S. and the U.K., the first time a new chapter of “Sherlock” will air in both countries on the same day.