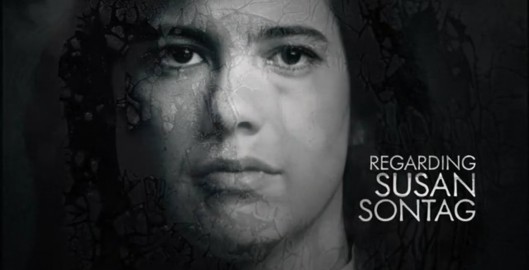 “Regarding Susan Sontag” is a new documentary film exploring the fascinating life of thinker, philosopher, writer and director Susan Sontag. Educated at the University of Chicago, Harvard, Oxford and the Sorbonne, Sontag is described best by the filmmaker’s description:

“Regarding Susan Sontag is an intimate and nuanced investigation into the life of one of the most influential and provocative thinkers of the 20th century. Passionate and gracefully outspoken throughout her career, Susan Sontag became one of the most important literary, political and feminist icons of her generation.

The documentary explores Sontag’s life through evocative experimental images, archival materials, accounts from friends, family, colleagues, and lovers, as well as her own words, read by actress Patricia Clarkson. From her early infatuation with books and her first experience in a gay bar; from her marriage in adolescence to her last lover, Regarding Susan Sontag is a fascinating look at a towering cultural critic and writer whose works on photography, war, illness, and terrorism still resonate today.

More than any other thinker of her day, Sontag was watched, viewed, photographed and stared at. She was gazed at, and she looked back, very carefully, particularly at language and metaphor and at photography and what she called “the ecology of images.” Regarding Susan Sontag gives viewers the chance to watch Sontag while she examines the world.”

Her own films are deeply inspired by modernist style. The first two, Duet for Cannibals (1969) and Brother Carl (1971), both shot and produced in Sweden, bear clear influences of Bergman’s reflections about the impossibility of human communication. Letter from Venice (1983) is an elegiac documentary of a mental tour of melancholia, while “Promised Lands” is a shocking documentary about Israel/Palestine that managed to outrage both the pro-Israelis and the pro-Palestinians at the time of its release in the mid 1970’s.”