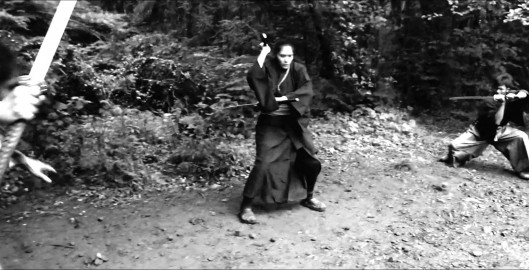 In a time of civil war, a young warrior is given the task of delivering a treaty between two rival lords. During her journey through the woods however, she finds herself hunted by two assassins intent on intercepting her message of peace in a bid to maintain the fear, instability and violent rule of their leader. Production Details:

The following is a test action sequence designed by Yayan Ruhian, Cecep Arif Rahman and Gareth Evans. It was designed in a bid to create choreography that maintains the style and rhythm set out in their prior work (The Raid 1 & 2) while staying within the parameters of a PG-13/12A audience friendly certification.

Designed in under a week, it was shot over the course of 3 days on location in Hirwaun, WALES. The short sequence was shot using a Sony NEX-7 with only the Director and Cast on location. No other crew and cast worked on this project during the shoot.

Post production was handled in-house with Gareth Evans handling the offline edit while Fajar Yuskemal and Aria Prayogi continued their collaboration by providing an instrumental score tailor made to the project that would call upon cultural elements (the mix of Japanese and Indonesian instruments) inherent in the design of the film.

They have also undertaken the recording of ADR with the cast, foley and editing all sound FX before completing a final stereo mix.