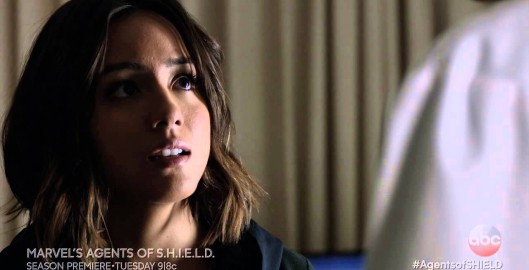 Marvel’s “Agents of SHIELD” returns for season three with Chloe Bennet and Juan Pablo Raba. In season 2, Terrigen crystals were dumped into the ocean, threatening to unlock the Inhuman DNA in anyone who comes into contact with them. Alternatively, the Terrigen turns them to dust, depending on their genetics. That fate befalls an unwitting man called Joey Gutierrez (Juan Pablo Raba) in the opening minutes of the “SHIELD” premiere.

It’s up to Daisy Johnson (Chloe Bennet) — the SHIELD agent formerly known as Skye — and her allies to track down the newly transformed Inhumans and assess whether they’re worthy of joining her new team, SHIELD based on the Secret Warriors in Marvel’s comic books. From the Marvel Entertainment description:

Clark Gregg reprises his role of Agent Phil Coulson from Marvel’s feature films as he assembles a small, highly select group of Agents from the worldwide law-enforcement organization known as SHIELD. Together they investigate the new, the strange, and the unknown across the globe, protecting the ordinary from the extraordinary. Coulson’s team consists of Agent Grant Ward (Brett Dalton), highly trained in combat and espionage, Agent Melinda May (Ming-Na Wen) expert pilot and martial artist, Agent Leo Fitz (Iain De Caestecker); brilliant engineer and Agent Jemma Simmons (Elizabeth Henstridge) genius bio-chemist. Joining them on their journey into mystery is new recruit and computer hacker Skye (Chloe Bennet).