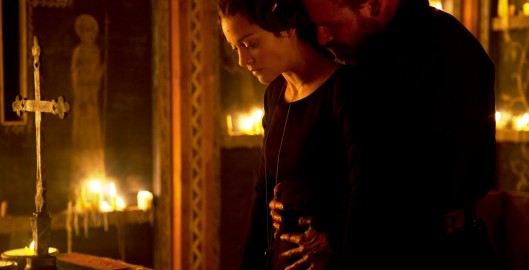 Michael Fassbender and Marion Cotillard star in the highly anticipated “Macbeth” directed by Justin Kurzel. This adaptation of the classic Macbeth by William Shakespeare was filmed on location in Scotland and England. From the Studio Canal description:

From the Academy Award® winning producers of The King’s Speech and acclaimed director Justin Kurzel, comes a visceral and visually breath-taking retelling of the classic tale about an ambitious Scottish lord who seizes the throne with the help of his wife. Starring Academy Award® nominee Michael Fassbender and Academy Award® winner Marion Cotillard, Macbeth is an epic cinematic experience.

“Justin Kurzel’s scarcely improvable new adaptation…fearsomely visceral and impeccably performed, it’s a brisk, bracing update, even as it remains exquisitely in period. Though the Bard’s words are handled with care by an ideal ensemble, fronted by Michael Fassbender and a boldly cast Marion Cotillard, it’s the Australian helmer’s fervid sensory storytelling that makes this a Shakespeare picture for the ages…” – Cannes Review by Guy Lodge, Variety

Justin Kurzel’s description of the adaptation:

“‘Macbeth’ is the story of a fearless warrior and inspiring leader brought low by ambition and desire. A thrilling interpretation of the dramatic realities of the times and a re-imagining of what wartime must have been like for one of Shakespeare’s most famous and compelling characters, a story of all-consuming passion and ambition set in war torn 11th Century Scotland.”

Macbeth – Official US Trailer No. 2