Its Only The End Of The World 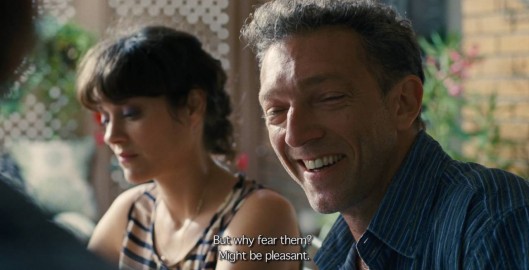 “Its Only The End Of The World” stars Marion Cotillard, Léa Seydoux and Gaspard Ulliel as a terminally ill writer who returns home after a long absence to tell his family that he is dying after 12 years of absence. As resentment soon rewrites the course of the afternoon, fits and feuds unfold, fueled by loneliness and doubt, while all attempts of empathy are sabotaged by people’s incapacity to listen and love.

Its Only the End of the World (French: Juste la fin du monde) is a Canadian-French drama film written, edited and directed by Xavier Dolan. The film is based on the play Juste la fin du monde by Jean-Luc Lagarce. The film stars Gaspard Ulliel, Nathalie Baye, Marion Cotillard, Léa Seydoux and Vincent Cassel. It has been selected to compete for the Palme d’Or at the 2016 Cannes Film Festival. Read more.

Dolan’s first film “I Killed My Mother” attracted international acclaim and won three awards at the Director’s Fortnight program at the 2009 Cannes Film Festival. He released “Heartbeats,” which premiered at the Un Regard section at the 2010 Cannes Festival, “Laurence Anyways,” which also premiered at Un Regard in 2012, and “Tom at the Farm,” which won the FIPRESCI Prize at the 70th Venice International Film Festival. “It’s Only the End of the World” won the Jury Prize at this year’s Cannes Film Festival. It will be released in Quebec and France on September 21st.

Dolan’s 2014 film, Mommy, shared the Jury Prize in the main competition section at the 2014 Cannes Film Festival with Jean-Luc Godard’s film Goodbye to Language (Adieu au langage). The Jury president at the 2014 festival was Jane Campion and, upon receiving the award, Dolan stated: “The Piano [Campion’s film] was the first film that I watched that truly defined who I am…It made me want to write films for beautiful women with soul and will and strength. To even stand on the same stage as you [Campion] is extraordinary.” Read more.

Its Only The End Of The World Trailer

Its Only The End Of The World Clip 2

Its Only The End Of The World Clip 1