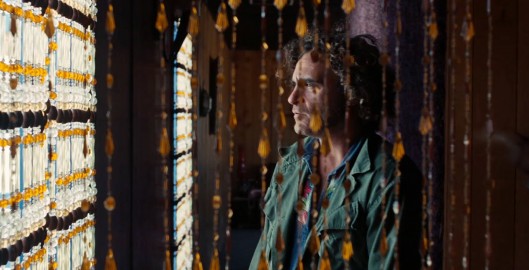 Starring Reese Witherspoon and Joaquin Phoenix, “Inherent Vice” is the highly anticipated film From Warner Bros. about a drug-addicted detective investigating the disappearance of a girlfriend. Directed by Paul Thomas Anderson, Inherent Vice is the first ever film adaption of a Thomas Pynchon novel. From the Warner Bros. description:

When private eye Doc Sportello’s ex-old lady suddenly out of nowhere shows up with a story about her current billionaire land developer boyfriend whom she just happens to be in love with, and a plot by his wife and her boyfriend to kidnap that billionaire and throw him in a loony bin…well, easy for her to say.

It’s the tail end of the psychedelic `60s and paranoia is running the day and Doc knows that “love” is another of those words going around at the moment, like “trip” or “groovy,” that’s being way too overused—except this one usually leads to trouble.

With a cast of characters that includes surfers, hustlers, dopers and rockers, a murderous loan shark, LAPD Detectives, a tenor sax player working undercover, and a mysterious entity known as the Golden Fang, which may only be a tax dodge set up by some dentists… Part surf noir, part psychedelic romp—all Thomas Pynchon.

Oscar nominee Paul Thomas Anderson (“There Will Be Blood,” “The Master”) directed “Inherent Vice” from a screenplay he wrote based on the novel by Thomas Pynchon. Anderson also produced the film, together with Oscar-nominated producers JoAnne Sellar and Daniel Lupi (“There Will Be Blood”). Scott Rudin and Adam Somner served as executive producers.

“The ’60s are over, everyone is on the run, and there’s nowhere to hide in Paul Thomas Anderson’s audacious, fiercely funny Pynchonian stoner noir.” – Scott Foundas, Variety

“…the film is stupendous: as antic as “Boogie Nights” and “Punch-Drunk Love,” but with “The Master” and “There Will Be Blood’s” uncanny feel for the swell and ebb of history.” – Robbie Collin, Telegraph

“This movie is so funny, so strange, so wonderfully charmingly deranged.” – Drew McWeeny, HitFix