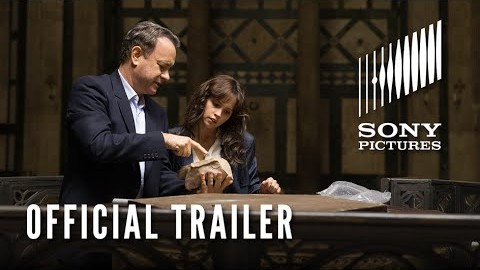 After waking up in a hospital with amnesia, professor of symbology Robert Langdon (Tom Hanks) and a doctor (Felicity Jones) must follow a trail of clues related to Dante in a race against time to foil a deadly global plot in Ron Howard’s “Inferno”. The drama is based on the newest book in the Dan Brown Robert Langdon series. From the Sony Pictures Entertainment description:

Academy Award® winner Ron Howard returns to direct the latest bestseller in Dan Brown’s (Da Vinci Code) billion-dollar Robert Langdon series, Inferno, which finds the famous symbologist (again played by Tom Hanks) on a trail of clues tied to the great Dante himself. When Langdon wakes up in an Italian hospital with amnesia, he teams up with Sienna Brooks (Felicity Jones), a doctor he hopes will help him recover his memories. Together, they race across Europe and against the clock to foil a deadly global plot.

From the Dan Brown story description:

In his international blockbusters The Da Vinci Code, Angels & Demons, and The Lost Symbol, Dan Brown masterfully fused history, art, codes, and symbols. In this riveting new thriller, Brown returns to his element and has crafted his highest-stakes novel to date.

In the heart of Italy, Harvard professor of symbology Robert Langdon is drawn into a harrowing world centered on one of history’s most enduring and mysterious literary masterpieces . . . Dante’s Inferno.

Against this backdrop, Langdon battles a chilling adversary and grapples with an ingenious riddle that pulls him into a landscape of classic art, secret passageways, and futuristic science. Drawing from Dante’s dark epic poem, Langdon races to find answers and decide whom to trust . . . before the world is irrevocably altered.