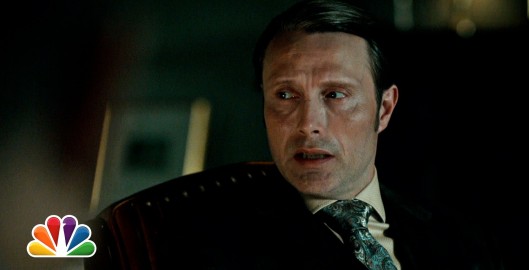 “Hannibal” season 2 finds Dr. Hannibal Lecter on the outside of the prison bars. Locked up in previous films Manhunter, Silence of the Lambs, and the Manhunter remake Red Dragon, the series is a dramatic shift for the Thomas Harris franchise. Bryan Fuller’s “operatic” adaptation for NBC finds Dr. Lecter looking in, and FBI profiler Will Graham looking out from behind the bars. Graham’s boss, Jack Crawford, took Graham into custody for murder in season 1 – framed for Lecter’s crimes. Now Graham wants to prove that Lecter did it. Starring Hugh Dancy, Laurence Fishburne and Mads Mikkelsen with new guest stars Jeremy Davies (Lost, Justified), Jonathan Tucker (The Texas Chainsaw Massacre) and Amanda Plummer (Pulp Fiction, Catching Fire) in season 2. The show premiered February 28th.

NBC announced May 9th, 2014 that it has renewed Hannibal for another season. Return to Thumbnail View.