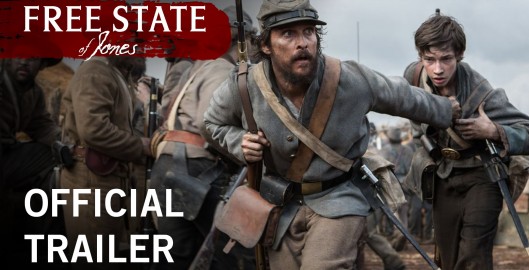 Based on a true story, the “Free State Of Jones” stars Oscar® winner Matthew McConaughey who leads an armed group of farmers and slaves against the Confederacy during the Civil War. From the film’s description:

Written and directed by four-time Oscar® nominee Gary Ross (THE HUNGER GAMES, SEABISCUIT, PLEASANTVILLE), and starring Oscar® winner Matthew McConaughey. FREE STATE OF JONES is an epic action-drama set during the Civil War, and tells the story of defiant Southern farmer, Newt Knight, and his extraordinary armed rebellion against the Confederacy.

Banding together with other small farmers and local slaves, Knight launched an uprising that led Jones County, Mississippi to secede from the Confederacy, creating a Free State of Jones.

Knight continued his struggle into Reconstruction, distinguishing him as a compelling, if controversial, figure of defiance long beyond the War.

The Knight Company Rebellion has been a source of great interest for over a hundred years. Though often debated, most now see it as an economic revolt— poor farmers who didn’t want to shoulder the burden of a war fought to benefit rich slave-holders. They called it a “poor man’s fight and a rich man’s war.”

The Knight Company was organized and surprisingly effective. There is clear and compelling evidence that the area around Jones County declared “independence” toward the end of the Civil War. In 1934, Newt Knight’s son wrote the following:

“They did not want to be put under a slave government. They believed in a free government, equal rights to all people, rich or poor. It should not make any difference who they were. So as my father told us, [of] the 375 men that voted to stay with the Union about 250 of them met together with the understanding they would come together and bind themselves together and to constitute a Free State of Jones.” Read more.

Everything Will Be Fine Official Trailer