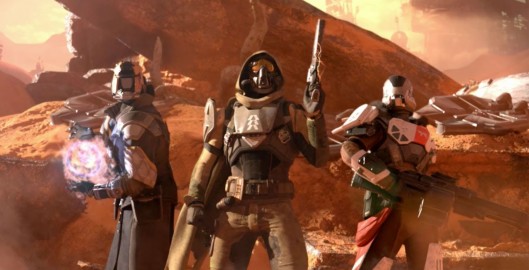 “Destiny” is an upcoming shared-world game from the creators of Halo that combines elements of massive multiplayer games, group missions, classes and experience in its online world. With its next generation of the first-person action genre, Destiny provides players with “an unprecedented combination of storytelling, cooperative, competitive, and public gameplay, and personal activities that are all seamlessly woven into an expansive, persistent online world. Venture out alone or join up with friends. The choice is yours”, according to the Destiny site. From the Destiny official story description:

In Destiny you are a Guardian of the last city on Earth, able to wield incredible power. Explore the ancient ruins of our solar system, from the red dunes of Mars to the lush jungles of Venus. Defeat Earth’s enemies. Reclaim all that we have lost. Become legend.

Embark on an epic action adventure with rich cinematic storytelling where you unravel the mysteries of our universe and reclaim what we lost at the fall of our Golden Age.

Considered to be one of the biggest launches for a new videogame in years, Activision concluded a beta test of the game last month on the PlayStation 4 and PS3, during which 4.6 million people sampled the characters, settings and action. Eric Hirshberg, CEO of Activision Publishing said about the beta test:

This is the biggest beta of this console generation by a wide margin and the largest console beta ever for a new video game IP to date. Hosting a beta at this scale is an incredible feat, so we’re thrilled to see the phenomenal response. But the beta is just a taste of what’s to come.”

With rich cinematic storytelling set in huge worlds to explore, players create and customize their Guardian and defeat enemies to become legend in cooperative, competitive, and innovative public gameplay modes. Destiny will be released on PlayStation 3, PlayStation 4, Xbox 360, and Xbox One video game consoles on September 9, 2014. Return to Thumbnail View.