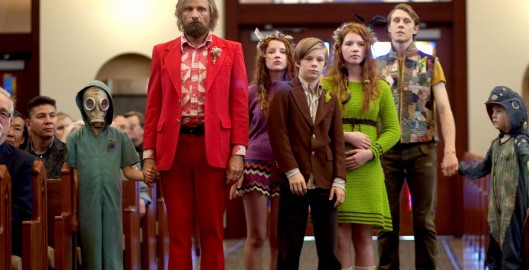 Frank Langella, Kathryn Hahn and Viggo Mortensen star in “Captain Fantastic”, about a devoted father of six living in the forest. From the film’s description:

Deep in the forests of the Pacific Northwest, a father (Viggo Mortensen) devoted to raising his six kids with a rigorous physical and intellectual education is forced to leave his paradise and enter the world, beginning a journey that challenges his idea of what it means to be a parent.

In CAPTAIN FANTASTIC, Ben Cash (Mortensen) raises his six kids in the wilds of the Pacific Northwest. Far from public schools, Cash has created an exacting and exhilarating curriculum that aims not simply to educate them, but to teach them to become virtuous and open-minded citizens of the world.

Academically, the kids engage in a rigorous regime of reading literary, historical, philosophical and scientific classics, as well as learning multiple foreign languages and musical instruments.

Physically, they train daily in a way that would put most urban cross fitness classes to shame. In addition to books, the family learns from nature, cultivating the skills of farming, hunting, fishing, and constructing teepees, and a range of other practical disciplines.

Captain Fantastic Clip – So They Know We Are Coming