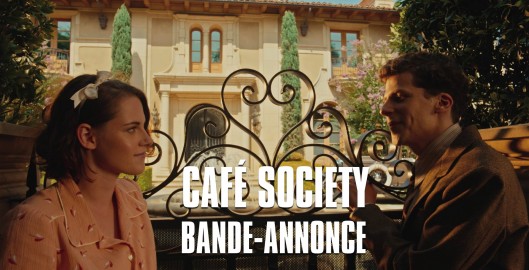 Kristen Stewart and Jesse Eisenberg star in Woody Allen’s “Cafe Society” with Blake Lively, Parker Posey and Corey Stoll. The story follows a young man in Hollywood during the 1930’s who hopes to work in the film industry. He falls in love and finds himself swept up in the vibrant café society that defined the spirit of the age. Cafe Society is set to premiere in Cannes’ 16. From the Vanity Fair description:

Café Society centers on Eisenberg as the traditional Allen avatar—a neurotic creative who, this time around, heads to Hollywood to make it in the entertainment industry. Under the wing of his uncle (Steve Carell), Eisenberg’s characters makes inroads into the titular society that defined the 30s—and with Carell’s screen assistant Bonnie, played by Stewart. It doesn’t take long for Eisenberg to fall under Bonnie’s bewitching spell—alas, she has a boyfriend. (A character consoles him in the most Woody Allen-esque manner possible, saying, “Unrequited love kills more people in one year than tuberculosis.”) Read more.