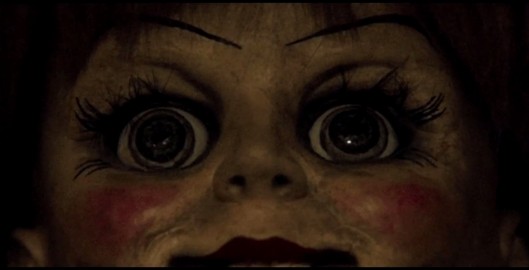 “Annabelle” is the upcoming spin-off – and possibly a prequel – feature film to “The Conjuring”, a film based on famous cases that were investigated by renowned paranormal investigators Ed and Lorraine Warren. In The Conjuring, the most insidious case revolved around a possessed and demented doll named Annabelle – she resides now in the home of the Warrens. in their Occult Museum. From the Warner Bros. description:

She terrified you in “The Conjuring,” but this is where it all began for Annabelle. Capable of unspeakable evil, the actual doll exists locked up in an occult museum in Connecticut—visited only by a priest who blesses her twice a month.

On one horrific night, their home is invaded by members of a satanic cult, who violently attack the couple. Spilled blood and terror are not all they leave behind. The cultists have conjured an entity so malevolent that nothing they did will compare to the sinister conduit to the damned that is now…Annabelle.

See the new trailer and featurettes for The Conjuring 2 starring Vera Farmiga and Patrick Wilson star as Lorraine and Ed Warren.