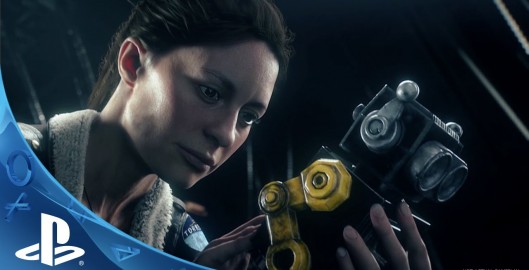 The newest first-person game based on the classic film Alien, “Alien Isolation” is a survival horror game set in an atmosphere of constant dread and mortal danger. “Ripley’s daughter Amanda enters a desperate battle for survival, on a mission to unravel the truth behind her mother’s disappearance” according to the press release. From the game’s official description:

Returning to the hauntings of space, Alien Isolation pits your survival instincts against a familiar and deadly terror.

On a decommissioned trading station in the fringes of space, fear and desperation have gripped the remaining inhabitants as an unknown hunter stalks the dark.

In an atmosphere of constant dread and mortal danger, you will have to escape an unpredictable and merciless Xenomorph that kills from deep within the shadows. Underpowered and underprepared, you must scavenge resources, use your wits and improvise, not just to succeed in your mission, but to stay alive.

“In Alien Isolation, we have taken the series back to the roots of Ridley Scott’s 1979 movie, the original survival horror,” said Alistair Hope, Creative Lead, “Our Alien is a truly terrifying creature, as intelligent as he is hostile, relentless, brutal and unstoppable.”

Made by Creative Assembly. Releases October 7th, 2014 for XBox 360, Xbox One, PlayStation 3, PlayStation 4 and PC. Return to Thumbnail View.