Glen Keane Step Into The Page from Future Of StoryTelling 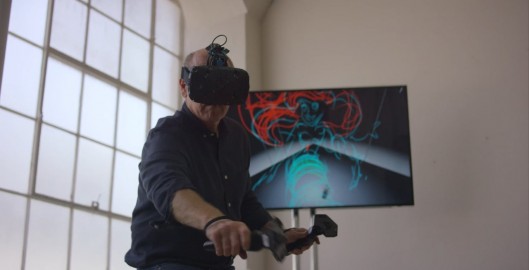 “Glen Keane Step Into The Page” features Disney animator Glen Keane, best known for his work on Tangled, The Little Mermaid, Tarzan, Pocahontas, Beauty and the Beast and Duet. He was the recipient of the Winsor McCay Lifetime Achievement Award in 2008 for his work in the current generation of Disney character animators.

He is also the recipient of the 2012 Tex Avery Award, and he was a 2013 Disney Legend Award honoree for his contribution in Animation. Keane is now involved in the ‘Future of Storytelling’ project bringing together leaders from the worlds of media, technology, and communications to explore how stories are changing in the digital age. From the Future of Storytelling description:

Over nearly four decades at Disney, Glen Keane animated some the most compelling characters of our time: Ariel from The Little Mermaid, the titular beast in Beauty and the Beast, and Disney’s Tarzan, to name just a few. The son of cartoonist Bil Keane (The Family Circus), Glen learned early on the importance of holding onto your childhood creativity—and how art can powerfully convey emotion.

Keane has spent his career embracing new tools, from digital environments to 3D animation to today’s virtual reality, which finally enables him to step into his drawings and wander freely through his imagination. At FoST, he’ll explore how to tap into your own creativity, connecting to emotion and character more directly than ever before. Read more.

Glen Keane Step Into The Page

Watch the Future of Storytelling introduction…