Flicker Your Brain on Movies Explores Neuroscience of Movies 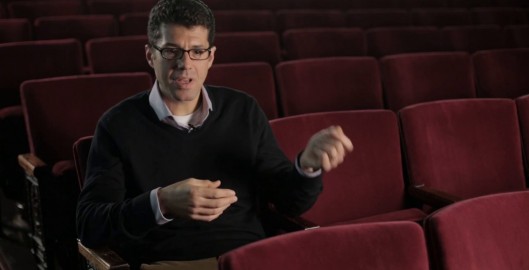 Neuroscientist Jeffrey M. Zacks PHD looks at the art of filmmaking through the lens of psychology and radiology in his book “Flicker Your Brain on Movies”, an entertaining and thought-provoking look at what neuroscience can tell us about the art of filmmaking. Zacks points out in the video:

“One of the striking things about understanding movies is that you come into the theater with the brain that you evolved over three-and-a-half billion years to understand the real world and, for the most part, your brain just treats what it’s seeing on the screen as if it were real. Our brains didn’t evolve to watch movies. Movies evolved to take advantage of the brains we have.”

Zacks, a professor of psychology in Arts & Sciences at Washington University in St. Louis, teaches courses on “The Cognitive Neuroscience of Film” and “Advanced Cognitive Psychology”. He has spent over a decade exploring what happens in the brain as we observe the world around us.

“Zacks is an academic who remembers how to communicate with ordinary people. The more technical passages, which explain how event models underpin so much of our cognition, or how visual processing is actually nothing like taking a picture, aren’t heavy going. But at the same time, there are a confidence and precision that reassure us things are not being dumbed down. ” -The Guardian

As a film fan, he started using short films in his laboratory research on how the human “brain segments its observance of daily activities into small, meaningful chunks that are easier for the mind to process and store as memories.” Go to Entertainment Thumbnails.

“The more I learned about filmmaking, the more I realized that people who make movies have really figured out over time how to get inside the minds of their audiences. People who can make good movies turn out to be fantastic intuitive psychologists and neuroscientists.”