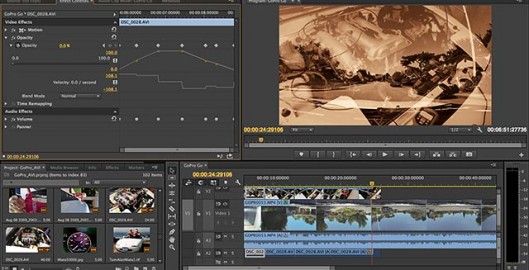 Filmmaking is a collaborative process, but the role of editor is regarded by many filmmakers as among the most indespensible when it comes to getting the intention and atmosphere of the film to the screen. Not only do they put the film together to achieve the story’s flow through tensions created and released by their editing choices, they must match everything they do, or recommend, to the intent of the script, story and director’s vision.

Today, more than even in the recent past with the continued advent of post-production software, the film’s final style and atmosphere is largely created in post production. Yes, the director and DP are critical. Yes, the film would be nothing without its actors, composers, screenwriters, production crew, production designer or director…or producer…or funders…or distribution…you get the point.

Numerous directors place their trust in and rely on certain editors throughout their career…Joel Cox is a principal editor for Clint Eastwood on over 30 films…Thelma Schoonmaker has worked with Martin Scorsese for more than 35 years and so has Michael Kahn with Steven Spielberg. The close integration of this creative and technical collaboration can, and often does, result in unforgettable and signature film achievements.

“Pudovkin theorised that actors on screen do not really act; it’s their context that moves us – something established, through montage, by their relationship to exterior objects.” –Jonathan Jones, The Guardian

And many of the elemental qualities of film editing started with V.I. Pudovkin. Who…? Vsevolod Pudovkin was involved in filmmaking as a director, screenwriter and actor in the 1920’s after learning from Lev Kuleshov. Kuleshov obtained a smuggled print of D.W. Griffith’s 1916 “Intolerance” and had his students learn by re-editing the film.

Pudovkin went on to direct “Mother” in 1926 in which he developed montage theories that ultimately made him famous. Over the next thirty years, he acted in, wrote or directed another 27 films. Then in 1958 after his death, Grove Press published “Film Technique and Film Acting – The Cinema Writings of V.I. Pudovkin”, an essential read for anyone interested in filmmaking.

“Editing is not merely a method of the junction of separate scenes or pieces, but is a method that controls the ‘psychological guidance’ of the spectator.” –V.I. Pudovkin

You can download the book in various formats including Kindle, PDF and more at the Internet Archives.