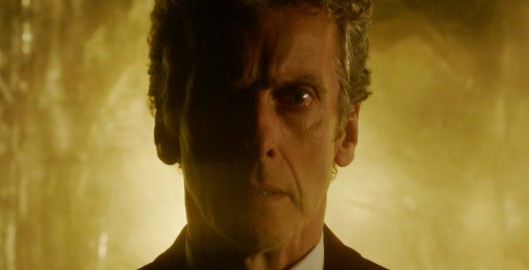 The long-running science fiction series “Doctor Who” returns for its ninth season September 19th, 2015 on BBC. The first trailer featuring Peter Capaldi was premiered at the San Diego Comic-con.

“Doctor Who” continues the travel adventures of The Doctor who is told in the short teaser that “I see into your soul, Doctor. I see beauty, divinity, hatred…” sounding like Davros, the creator of the Daleks who last appeared in “The End of Time”. In the newest full trailer, the Doctor asks Clara if he is a good man after having lived for more than 2000 years. From the IMDb description:

The continuing adventures of The Doctor, an alien time traveler – a Time Lord – from Gallifrey. Together with his companions they travel through time and space in the TARDIS, battling evil where they find it.

The season 8 premiere is a feature-length episode entitled “Deep Breath.” Peter Capaldi as the Doctor and Jenna Coleman as Clara. The upcoming eighth season premiered August 23rd, 2014 on BBC One and BBC America.

Doctor Who Trailer – Season 9 Trailer No. 2

Doctor Who Teaser Trailer – I See Into Your Soul

50 Years of Doctor Who Trailer