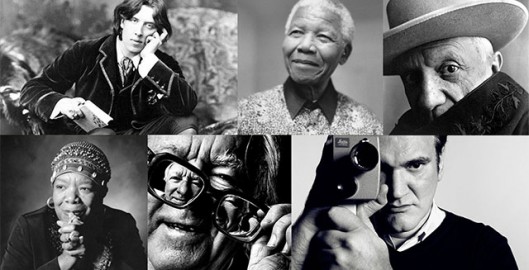 “The only person you are destined to become is the person you decide to be.”

“Trust your own instinct. Your mistakes might as well be your own, instead of someone else’s.”

“Great things are not accomplished by those who yield to trends and fads and popular opinion.”

“Don’t expect the puppets of your mind to become the people of your story. If they are not realities in your own mind, there is no mysterious alchemy in ink and paper that will turn wooden figures into flesh and blood.”

“New technologies are unlocking a world of storytelling opportunities for filmmakers to captivate, engage, and entertain audiences.”

“I have been successful probably because I have always realized that I knew nothing about writing and have merely tried to tell an interesting story
entertainingly.”

“The culture of independent film criticism has totally gone down the drain and this seems to come with the territory of the consumer age that we are now living in.”

“Farber had a huge effect on me as a writer. I don’t mean I write like him. Farber is, first of all, a great stylist, a great writer. Anyone can read Manny Farber’s film criticism, whether that person is a novelist, a poet, another critic, a historian, and learn a lot about writing by reading him.”

“Music in the soul can be heard by the universe.”

“The only people for me are the mad ones, the ones who are mad to live, mad to talk, mad to be saved, desirous of everything at the same time, the ones who never yawn or say a commonplace thing, but burn, burn, burn like fabulous yellow roman candles exploding like spiders across the stars.”

“Remember no one can make you feel inferior without your consent. “