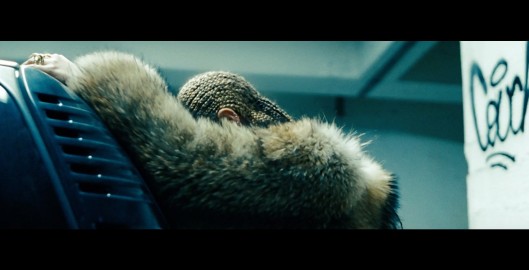 The 12-track project premiered on HBO on Saturday night April 23, 2016. The music, originally available only on Tidal, the streaming service owned in part by Beyoncé and her husband, Jay-Z, and the film are now available on iTunes.

From the New York Times review:

“Lemonade is less a dramatization than a daydream, infused with black magic, embracing—if only notionally—African tribalism, science fiction, menstruation and witchcraft,” writes New York Times critic at large Wesley Morris. “Visually, Lemonade invokes a lot—Madonna’s ‘La Isla Bonita,’ Carrie, Beasts of the Southern Wild and the car-smashing at the end of Michael Jackson’s ‘Black or White.’ But what its black-female spiritualism calls to mind is Daughters of the Dust, Julie Dash’s landmark tone poem from 1991, loosely—very loosely—about three generations, descended from slavery, and their migration north in 1902. The juicy immediacy of Lemonade is what this one man did to this one woman…. Its seven credited directors—Jonas Åkerlund, Kahlil Joseph, Melina Matsoukas, Dikayl Rimmasch, Mark Romanek, Todd Tourso and Beyoncé—give this project texture, mystery and life.” Read more on the New York Times.

From the New Yorker description calling Lemonade “a Revelation of Spirit”:

The project is also a piece of spoken word, a narrative film, a map of cultural reference points, and a window into the soul of an icon whose inner life has always seemed just out of reach. What Beyoncé obscures in her everyday public life she makes relentlessly clear on this project. Her relationship with her husband, Jay Z, which at a distance is a seemingly divine union of power and joy, has in fact been a tortuous journey; a bottomless well of pain, and, in turn, artistic fuel. Lemonade is the product of a brutal tension: a woman who has been deified by the entire world and yet cannot secure the love of the person closest to her. Last time around, Beyoncé announced herself to the world as a feminist. This time, she takes that label, turns it inward and intensifies it. Lemonade declares that misogyny is at its most potent and complex within the bonds of love. Read more on the New Yorker.