Aretha Franklin Sings You Make Me Feel Like A Natural Woman 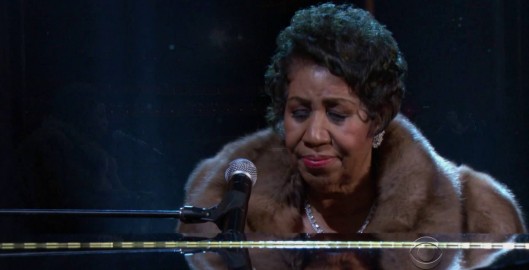 Aretha Franklin Sings You Make Me Feel Like A Natural Woman

From the Kennedy Center announcement:

The Kennedy Center announced the selection of the five Honorees who will receive the 2015 Kennedy Center Honors. Recipients to be honored at the 38th annual national celebration of the arts are: singer-songwriter Carole King, filmmaker George Lucas, actress and singer Rita Moreno, conductor Seiji Ozawa, and actress and Broadway star Cicely Tyson.

“Quite simply,” said Kennedy Center Chairman David M. Rubenstein, “our Honorees represent the voices, soundtracks, and stories of our personal lives and memories.”

“When I look at this year’s outstanding slate of Honorees, I am struck by a powerful common theme-artists as history-makers, artists who defy both convention and category,” commented Kennedy Center President Deborah F. Rutter.

In a star-studded celebration on the Kennedy Center Opera House stage, produced by Ricky Kirshner and Glenn Weiss of White Cherry Entertainment, the 2015 Honorees will be saluted by today’s leading performers from New York, Hollywood, and the arts capitals of the world. Seated with the President of the United States and Mrs. Obama, the Honorees will accept the thanks of their peers through performances and tributes.